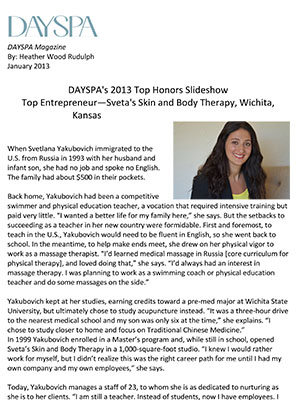 When Svetlana Yakubovich immigrated to the U.S. from Russia in 1993 with her husband and infant son, she had no job and spoke no English. The family had about $500 in their pockets.

Back home, Yakubovich had been a competitive swimmer and physical education teacher, a vocation that required intensive training but paid very little. “I wanted a better life for my family here,” she says. But the setbacks to succeeding as a teacher in her new country were formidable. First and foremost, to teach in the U.S., Yakubovich would need to be fluent in English, so she went back to school. In the meantime, to help make ends meet, she drew on her physical vigor to work as a massage therapist. “I’d learned medical massage in Russia [core curriculum for physical therapy], and loved doing that,” she says. “I’d always had an interest in massage therapy. I was planning to work as a swimming coach or physical education teacher and do some massages on the side.”

Yakubovich kept at her studies, earning credits toward a pre-­‐med major at Wichita State University, but ultimately chose to study acupuncture instead. “It was a three­‐hour drive to the nearest medical school and my son was only six at the time,” she explains. “I chose to study closer to home and focus on Traditional Chinese Medicine.”

In 1999 Yakubovich enrolled in a Master’s program and, while still in school, opened Sveta’s Skin and Body Therapy in a 1,000-­‐square-­‐foot studio. “I knew I would rather work for myself, but I didn’t realize this was the right career path for me until I had my own company and my own employees,” she says.

Today, Yakubovich manages a staff of 23, to whom she is as dedicated to nurturing as she is to her clients. “I am still a teacher. Instead of students, now I have employees. I spend my days working with each of them to improve their career and personal skills,” she says. “My greatest reward is seeing how people grow while they are here, and giving employees the opportunity to support their families while doing something that they love.”

That people-­‐first focus has paid off financially. In 2010, Yakubovich expanded her facility to encompass 2,200 square feet. She is a celebrated entrepreneur in her community, and was recently named one of the top women in business by the Wichita Business Journal.

Despite being busy running the business end of Sveta’s, Yakubovich continues to work as a therapist in her own spas, and values her customers not only for their patronage, but for their wisdom, too. “My clients are smart, educated people who run their own businesses,” she says. “I’ve received some of the best advice from my clients, and they continue to be my greatest supporters.” —Heather Wood Rudúlph