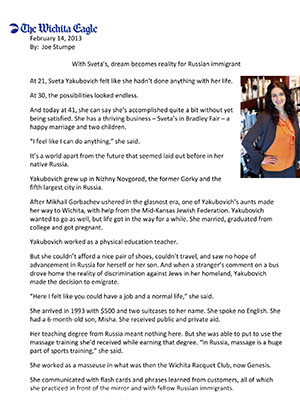 With Sveta’s, dream becomes reality for Russian immigrant. At 21, Sveta Yakubovich felt like she hadn’t done anything with her life.

At 30, the possibilities looked endless.

And today at 41, she can say she’s accomplished quite a bit without yet being satisfied. She has a thriving business – Sveta’s in Bradley Fair – a happy marriage and two children.

“I feel like I can do anything,” she said.

It’s a world apart from the future that seemed laid out before in her native Russia.

Yakubovich grew up in Nizhny Novgorod, the former Gorky and the fifth largest city in Russia.

After Mikhail Gorbachev ushered in the glasnost era, one of Yakubovich’s aunts made her way to Wichita, with help from the Mid-­‐Kansas Jewish Federation. Yakubovich wanted to go as well, but life got in the way for a while. She married, graduated from college and got pregnant.

But she couldn’t afford a nice pair of shoes, couldn’t travel, and saw no hope of advancement in Russia for herself or her son. And when a stranger’s comment on a bus drove home the reality of discrimination against Jews in her homeland, Yakubovich made the decision to emigrate.

“Here I felt like you could have a job and a normal life,” she said.

She arrived in 1993 with $500 and two suitcases to her name. She spoke no English. She had a 6-­‐month-­‐old son, Misha. She received public and private aid.

Her teaching degree from Russia meant nothing here. But she was able to put to use the massage training she’d received while earning that degree. “In Russia, massage is a huge part of sports training,” she said.

She worked as a masseuse in what was then the Wichita Racquet Club, now Genesis.

She communicated with flash cards and phrases learned from customers, all of which she practiced in front of the mirror and with fellow Russian immigrants.

She still remembers one of the first ones: “Please lie back with your head on the table.”

She took English classes at Butler Community College and acupuncture classes at the Kansas College of Chinese Medicine. She absorbed everything she could from customers, who often became friends and mentors.

When one of them, Bradley Fair developer George Laham, suggested she open a spa in his upscale shopping center, Yakubovich said her first reaction was: “Are you insane?”

“I didn’t know that every third business fails, which is good,” she said.

Like every business dependent on discretionary spending, Sveta’s saw a significant downturn in the 2008 recession. But it survived, and in 2010 it expanded into the space next door, going from five rooms and 1,100 square feet to 10 rooms and 2,200 square feet. Today more than 20 people work for Yakubovich, most on a part-­‐time basis, which she said is the norm in the industry.

The spa has a couples room and, thanks to its overall size, can accommodate large parties and special events. Prices range from $25 for a basic manicure or waxing up to

$367 for the Imperial Package – deluxe massage, facial, pedicure and manicure. The average customer spends about $80.

She said her clientele is about evenly split between men and women, with men getting the majority of massages and women the other services.

Yakubovich sells a line of skin and body products with her name on them that are made by a Canadian company. A letter campaign has gotten her featured in trade publications such as DaySpa magazine.

Yakubovich said she thinks she’s succeeded by growing slowly, in response to customer demand for services, and avoiding fads “that come and go.”

She puts a big emphasis on personalized service, urging her staff to remember whether a customer prefers bottled water before or after a massage, for instance. Little bags of candy are set out for customers around the spa, and Yakubovich confesses to being a stickler for cleanliness.

The opportunity she sought as a teenager has become a reality. Her son, Misha, is a student at the University of California. Her daughter, Masha, is 10 – “my obsession,” she said.

Her husband, Simon, works as a massage therapist at Wichita Country Club.

She seems to appreciate freedom in the way that perhaps only somebody who’s lived without can.

“Here you can do anything,” Yakubovich said. “You don’t have to be super-­‐smart here. Maybe I shouldn’t say that. You just have to have determination.”

WICHITA — A decade after opening at Bradley Fair, Sveta Yakubovich is doubling the size of her Sveta’s Skin & Body Therapy.

“We’re still keeping . . . who we are,” she says. “It’s just kind of time to grow.” Part of the reason with the timing is because Zumo Juice will be leaving its space.

Sveta’s has 1,000 square feet and will now have 2,200 square feet with the Zumo space. Construction starts in October, and the business will remain open during the expansion.

The additional space will allow for double bookings for, say, a mother and daughter who might like to schedule appointments at the same time.

“We’re turning down lots of business like that,” Yakubovich says. “That would add, I think, a lot.”

She’ll also have a larger room for training employees and offering clients classes for things such as couples massage.

The reception area also will be larger, and there will be a private relaxation area for clients to use between services.

Spangenberg Phillips Tice is the project architect. Key Construction is the contractor. Sveta’s expansion is one of several new things happening at Bradley Fair.

LBD, etc., a women’s clothing boutique, and Carla’s Love It, a clothing and gift store, recently opened. Newport Grill, a seafood concept by the owners of Yia Yia’s EuroBistro, opens in November.

Yakubovich says a down economy is a great time to expand. “When the economy changes and becomes better, we’ll be ready.”